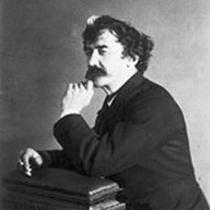 Painter and printmaker, born in Worthen Street, Lowell, Massachussetts. His family moved to Russia in 1843 and he received his first formal art instruction at the Imperial Academy of Fine Arts, St Petersburg. Returning to America he learned the technique of etching as a navy cartographer. After studies in France he settled in London in 1859. Among his prolific works the most famous is probably 'Arrangement in Grey and Black' - better known as 'Whistler's Mother'. The lady herself, Anna, lived around the corner in Chelsea and proudly looked after him, while he carefully shielded her from a full understanding of the disreputable life that he was leading, such as the illegitimate son by a chambermaid.

Starting in the 1860s he seems to have developed a strong relationship with the colour white, painting a series of women dressed in white, possibly inspired by 'The Woman in White', 1859, by Wilkie Collins, buildings a white house, wearing only white and owning white dogs.

A dandy and a wit, when a fan told him that he and Velasquez were the only two painters worthy of note he replied 'why drag in Velasquez?' And when Oscar Wilde said to him, 'I wish I had said that', he is supposed to have replied 'You will Oscar, you will!'. Oscar would say of Whistler that he always spelt Art with a capital I, and so their friendship changed to animosity over time.

Whistler's autobiography was titled 'The Gentle Art of Making Enemies' and he does seem to have been quite an unpleasant character but endlessly quotable. His reaction to accidentally shooting his host's dog was to declare "It was a dog without artistic habits and had placed itself badly in relation to the landscape." "Art for art's sake", indeed. Whistler died in London at 74 Cheyne Walk, which he had leased in 1902.

Spitalfields Life's post 'Whistler In The East End' has some exquisite drawings.

This section lists the memorials where the subject on this page is commemorated:
James McNeill Whistler

A charming old plaque, erected only 22 years after the artist's death.

Artist. We think Donnelly may be the instructor mentioned in this 2010 Cerami...

First Director of the National Gallery. President of the Royal Academy. First...