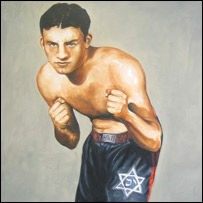 A test cricket series played between England and Australia. The name originat...

Heavyweight boxer. Born in Lambeth. Affectionately known as 'Our 'Enery', he ...