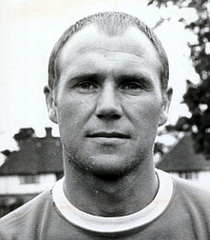 Footballer. Born Ramon Wilson in Shirebrook, Derbyshire. He played primarily for Huddersfield Town, Everton and was in the winning England team for the 1966 World Cup. At the end of his footballing career, he caused intrigue by starting a business in Huddersfield as an undertaker.

In the 2000 New Year's Honours List he was awarded an MBE for services to Association Football. He died, aged 83 years, on 15 May 2018 in a care home in Huddersfield from Alzheimer's disease after suffering from the condition for 14 years.

This section lists the memorials where the subject on this page is commemorated:
Ray Wilson MBE