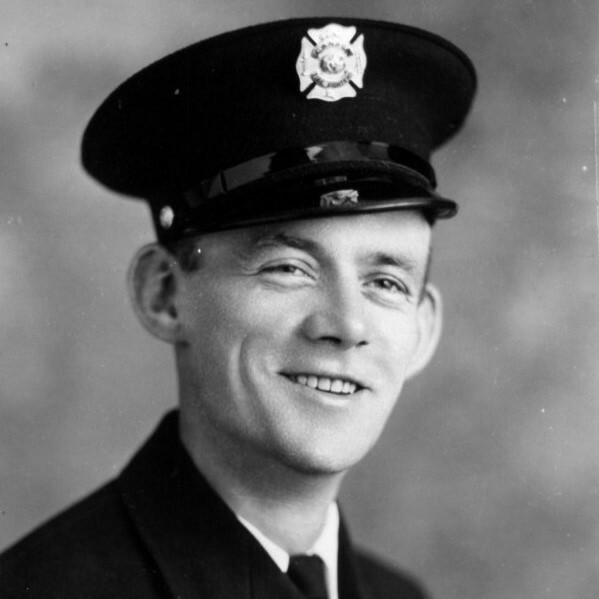 Canadian firefighter. He and a London firefighter were killed when a V1 flying bomb fell on part of Wildcroft Manor and exploded as they were attending a fire. Another Winnipegger, J.R.C. Leguee, survived the attack.

On 20 July 1929 he left Scotland aboard the White Star Line ship 'Laurentic' from the port of Greenock (Tail of the Bar) bound for Quebec, Canada and the ship's manifest shows him as a 3rd class passenger, travelling as one member of a Ministry of Labour group at the Special Migrant Rate of £10 cash. His occupation was recorded as a Labourer and his home address was given as 48 Seatown, Lossiemouth. On 2 August 1933 he married Erna Torgerson (1912-1996) in Winnipeg, Manitoba, Canada and they had one daughter, Joyce Solveig Coull, born about 1938. He was a firefighter in Winnipeg and on 15 May 1942 enlisted into the Canadian Corps of Firefighters in Ottawa, Ontario, Canada.

His service number was T.122 and he came to England to assist the National Fire Service three months later. He was killed, aged 36 years, on 3 July 1944 as a result of enemy action when a V1 flying bomb landed on the Metropolitan Water Board's cricket pavilion at Wildcroft Manor, Putney and was buried in RAF Graves Plot, Grave No.1237, Lossimouth Cemetery, Inchbroom Road, Lossiemouth, Moray. He is also commemorated on the National Firefighters Memorial at the junction of Carter Lane and Sermon Lane, London, EC4.

This section lists the memorials where the subject on this page is commemorated:
J. S. Coull 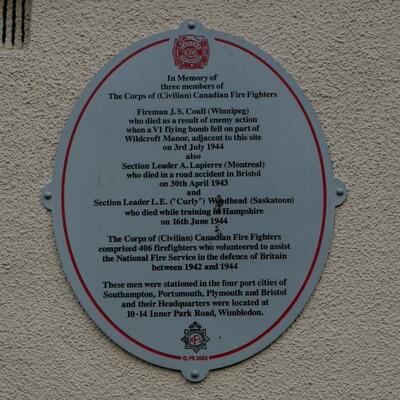 {On the floral emblem:} Canada fire fighters. In memory of three members of ...

Fireman killed as a result of an air raid on Old Palace School, Bow, E3 on 20 April 1941. Our colleague Andrew Behan has kindly researched this man: Auxiliary Fireman Frederick George Parcell was ...

Fireman killed in the Dudgeon's Wharf explosion. Andrew Behan has researched Smee: Fireman Alfred Charles Smee was born on 16 September 1921 and his birth was registered in Islington. He was the t... 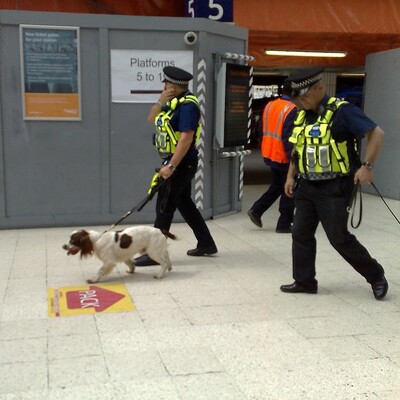 A national special police force that polices the railway network of England, Wales and Scotland. The force polices more than 10,000 miles of track and more than 3,000 stations and depots - tasked w...