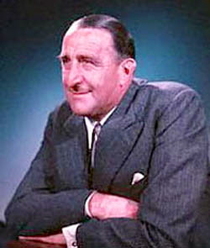 Flour miller and film-maker. Born Joseph Arthur Rank at Chestnut Villas, Holderness Road, Drypool, Kingston upon Hull. He worked for many years in his (very wealthy) father's flour milling business. During World War I he was responsible for a fleet of ambulances on the Western Front.

A devout Methodist, in 1928 he partially funded the adaptation of Lambeth Chapel for use as a mission hall and cinema. In 1933 he founded the Religious Film Society in order to produce religious films suitable for children. In 1937 he formed the Rank Organisation producing classic films including 'The Red Shoes', 'Hamlet' and 'Black Narcissus'.  He would probably have been horrified to know that his name was to become rhyming slang for a less than holy activity. Died at the Royal Hampshire County Hospital, Winchester.

This section lists the memorials where the subject on this page is commemorated:
J. Arthur Rank