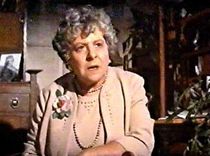 Comedy actor. Born 13 Leith Mansions, Paddington and grew up in St John's Wood. Began acting in her mid thirties and was almost never out of work, giving cameo performances in many British films of the times often as what she called 'the usual old girl in the crossover apron'. Late in life published two novels. Died at home  home, 31 Viscount Court, 1 Pembridge Villas.

This section lists the memorials where the subject on this page is commemorated:
Irene Handl