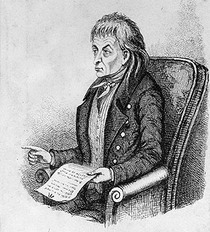 Born Edward Williams in Glamorgan. Founder member of the Unitarian movement in Wales, an anti-slavery campaigner, and political radical who called himself "The Bard of Liberty". As a stonemason he travelled to London where from his romantic vision of Wales and Welshness he created the ancient institution of the Gorsedd of the Bards of the Isle of Britain, even inventing a bardic alphabet. His ceremonies are an integral part of today's National Eisteddfod.

This section lists the memorials where the subject on this page is commemorated:
Iolo Morganwg