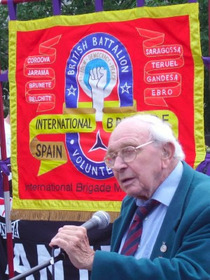 A military uprising in Spain in July 1936 was assisted by Hitler and Mussolini. The elected Spanish Republican government pleaded for help from France and Britain but, as part of the appeasement philosophy, this was denied. Many people across Europe were so appalled and worried that Spain might fall to the Fascists that they volunteered to fight alongside the Republicans. The Comintern (Communist International) organised these foreign volunteers into International Brigades.  It was estimated that between 30,000 and 35,000 people were involved in the Brigades.  More than 2,300 volunteers came from Britain, Ireland and the commonwealth, of who over 500 were killed. The majority were working-class and members of the Communist Party.

A Non-Intervention Committee had been set up by many European countries, with the aim of preventing personnel and supplies reaching the warring parties. In October 1938, this committee ordered the withdrawal of the brigades, while at the same time turning a blind eye to the support that Germany and Italy were giving to the Nationalist side.

This section lists the memorials where the subject on this page is commemorated:
International Brigades

{Front of memorial:} International Brigade In honour of the volunteers who le...