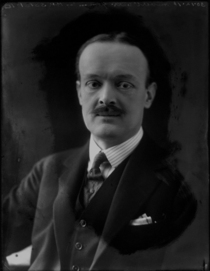 Hubert William Culling Carr-Gomm was born on 20 June 1877 in Palamcottah, Madras, India, (now Palayamkottai) and he was also baptised there on 19 August 1877. He was the eldest of the four children of Francis Culling Carr-Gomm (1835-1919) and Emily Blanche Carr-Gomm née Carr (1849-1909). His father was a member of Her Majesty's Indian Civil Service.

He was educated at both Eton College, Buckinghamshire (now Berkshire) and Oriel College, Oxford, graduating in Modern History in 1900. Between 1898 and 1907 he served in the 3rd Volunteer Battalion, The Royal West Surrey Regiment.

The 1901 census shows him at 7 Third Avenue, Hove, Sussex, with his parents, his two siblings, a governess, two footmen, a lady's maid, a house keeper, a housemaid and a scullery maid. His occupation was given as a Private Secretary and for a time he was the secretary of the London Liberal Foundation.

From 1906 to 1918 he was the Liberal MP for the Rotherhithe Division of Southwark and from 1906 to 1908 he was the Assistant Private Secretary to the Prime Minister, Sir Henry Campbell-Bannerman.

On 11 June 1906, as a Member of Parliament, aged 29 years, he married 19 years old Kathleen Isabella McNeale Rome (1887-1949) at St Margaret's Church, Westminster. His address was given as The Chase, Farnham Royal, Surrey, whilst she was shown as residing at 20 Markham Square, Chelsea. They lived together at both The Chase and at 15 Chester Street, Belgravia.

On 13 March 1913 he petitioned for divorce. He claimed that his wife had committed adultery with Eliot Crawshay-Williams (1879-1963), the Liberal MP for Leicester, in either Room 224 or 225 at The Burlington Hotel, Boscombe, Hampshire (now Dorset), on both the 28th and 29th  February 1912 and again at 1 Garden Studios, Manresa Road, Chelsea on 10 February 1913, and on the 9th, 10th and 11th March 1913. Both she and the co-respondent initially disputed the allegations but on 21 July 1913 agreed that the matter be undefended. A Decree Nisi was issued on 28 July 1913 and a Final Decree was granted on 9 February 1914. On 12 November 1913 Crawshay-Williams was ordered to pay the petitioner's costs of £253-16s-11d. The men had been friends at school, college and in politics. Crawshay-Williams already had two children and it ruined his political career.

During World War One he served as a Captain in the 22nd (County of London) Battalion, The London Regiment (The Queen's), in both France and Salonika and was subsequently awarded the British War Medal 1914-1918 and the Victory Medal. These were sent to him in 1925 at The Bodley Head in Vigo Street, London W1 where he had been appointed as a director of a publishing company.

In 1916 he married Eleanor Margaret Russell (1884-1967) and electoral registers show that were living at 75 Eaton Terrace, Belgravia from 1919 to at least 1928. When on 29 March 1936 they both arrived in Plymouth, Devon, travelling 1st Class aboard the S.S. Reina del Pacifico of The Pacific Steam Navigation Company, having embarked at Kingston, Jamaica, they were shown on the ship's manifest as residing at 28 Sloane Gardens, London, SW1.

He stood again as the Liberal candidate for Rotherhithe in the 1918 election but did not receive the letter issued jointly by David Lloyd George and Andrew Bonar Law (known as the Government Coupon) supporting his candidature. This was given to his Conservative opponent John Rolleston Lort-Williams who was successfully returned. He was a candidate there at the 1922 election he but still lost to Lort-Williams. In the 1923 election he was the Liberal candidate in Paddington South but the seat was retained by the sitting Unionist MP, Douglas King.

In 1936 he privately published a pamphlet calling for a system of proportional representation to be used in municipal elections in London where local government wards were ideal for its implementation.

He died from pneumonia, aged 61 years, on 21 January 1939 at the Hotel Pino de Oro, Santa Cruz, Tenerife, Canary Islands. Probate (save and except settled land) was initially granted on 22 May 1939 to his widow. His effects were £3,546-15s-1d. A further grant of probate (limited to settled land) was made on 5 July 1939 to his banker, Charles Vernon Somers Cocks, and his solicitor, John Anthony Tristram Barstow. These effects totalled £145,541.

This section lists the memorials where the subject on this page is commemorated:
Hubert Carr-Gomm

Founded in early June 1841 at a meeting at the Edinburgh Castle public house ...