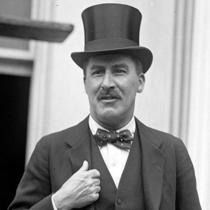 Archaeologist and artist. Born at 10 Rich Terrace, Kensington. He first went to Egypt as an artist and drew the painted reliefs of Queen Hatsheput at Thebes. After several years as chief inspector of the Egyptian Antiquities Service, he was employed by Lord Carnarvon to supervise his excavations, leading to the discovery of Tutankhamun's tomb in 1922. He subsequently became a lecturer, touring the United States in 1924. Died at 49 Albert Court, Kensington.

This section lists the memorials where the subject on this page is commemorated:
Howard Carter