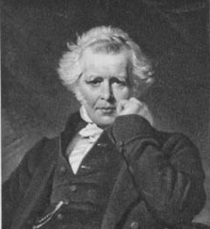 Evangelical Christian.  Born Clapham, son of Rev John Venn.  Graduated from Cambridge as 19th wrangler, which we learn means he was the 19th highest scoring undergraduate in mathematics.  Rector in Hull for a time, where his son, John, was born.  Active in the evangelical Christian movement, becoming secretary to the Church Missionary Society (for Africa and the East) in 1841 and remained in this post until he died.  In this role he lived first in Highgate and then Highbury.  Died East Sheen.

The plaque on Holy Trinity Clapham lists "Henry Venn curate of Clapham" as one of the Clapham Sect.   This could either be our Henry or his grandfather (1725-97).   The dates suggest that our Henry was intended (even though he was not curate of Clapham and his grandfather was).  We think the plaque erectors got a bit confused - easily done since the family consisted of a string of alternating Johns and Henrys most of whom were reverends.

This section lists the memorials where the subject on this page is commemorated:
Henry Venn

One of architect George Basevi's early commissions - he was brought up in Gre...

Established in the East End as the Bedford Institute Association to act on Ed...

There was a gun-manufacturing foundry at Windmill Hill, now Tabernacle Street...

In 1656 he founded almshouses in Palmer’s Passage for six poor old men and si...