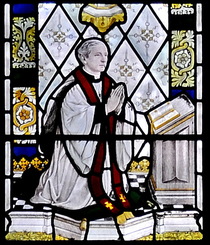 1895 appointed vicar when Holy Trinity Church was based in Knightsbridge and oversaw its move to Prince Consort Road in 1901.

Andrew Behan has researched Coward, here are his findings:
Henry Bartholomew Coward was born on 14 January 1855 at Amen Court, St Pauls, Ludgate, the son of John Henry Coward and Olivia Maria Coward, nee Lewis. His father was the Rector of St Benets Paul's Wharf, and he was baptised by his father at St Benets on 20 April 1855. The family were still living 1 Amen Court according to the 1861 census.

At the age of 9 he was admitted to St Pauls School and on 8 July 1869 he was made an apprentice to Henry Gardner, a vintner in the City of London. The 1871 census records that that the family were living at Amen Corner, Ludgate and in 1873 he went to Corpus Christi College, Cambridge. The 1881 census shows him living at 58 Fentiman Road, Lambeth and his occupation is recorded as Curate of St Ann, South Lambeth. The 1891 census shows him living at 11 Bessborough Gardens, Pimlico with a Housekeeper and a Housemaid. His occupation is Clerk in Holy Orders, but the 1901 census has him lodging at 11 Lower Grosvenor Place, Knightsbridge, aged 46 and single. His occupation was Clergyman (Church of England).

Kelly's street directory of 1902 lists him as Vicar of Holy Trinity, Park Side, Knightsbridge, residing at 11 Lower Grosvenor Place, SW. The Post Office telephone directory of 1922 lists him at 14 Queens Gate Place, SW7 and it was here that he died on 20 April 1933, aged 78 years. Probate was granted to his sister, Harriet Flora Lucy Coward and his estate totalled £4,569-5s-5d.

Our lovely picture of Coward comes, with his permission, from Peter Moore’s Flickr page which, amongst others, has many such sumptuous pictures of stained glass windows. On the panel to the right of Coward’s image is a glass inscription: “To the glory of God and in loving memory of the Rev. Henry Bartholomew Coward, MA (Cantab), Vicar of this parish for over thirty years. Erected by his parishioners and friends.” This window is in the north aisle of Holy Trinity Church, SW7, where the plaque is.

This section lists the memorials where the subject on this page is commemorated:
Henry Bartholomew Coward

The plaque does not make it clear that the early history all took place at an...

Young vicar who created The Samaritans.

Fr. Harry Richardson was instituted n 1925 as vicar of St Benet and All Saint...