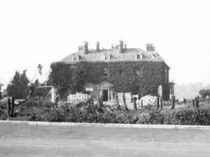 From the picture source: "Site of a house since the 15th century, in 1754 William Pitt the elder, later Earl of Chatham, bought the property, subsequently rebuilding it.

The birthplace of his son, Pitt the Younger in 1759 and the scene of his own death in 1778, it was visited by many of the major figures of the late 18th century but passed out of the family in 1785.

In 1880 Everard Hambro of the banking family, became the owner. Following his death in 1925 his son Eric decided to dispose of the estate for building, although the need for an improved infrastructure for this rural area meant delays. As a result the house survived until 1933."

This section lists the memorials where the subject on this page is commemorated:
Hayes Place

Valuation surveyor involved in the creation of Burgess Park. He was piloting ...