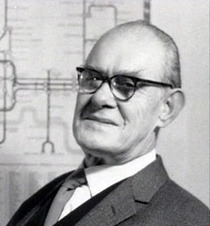 Graphic artist and map designer. Born 14 Wesley Road, Leyton but he was only there for about 3 years. He was brought up and educated in Highgate Village. Joined London Underground in 1925 on a temporary basis and remained with them on and off until 1937 and for a few years after the war. He produced the first version of the famous tube map in 1931. Fell out with LT over who should make changes to the map (sounds like he became a bit obsessional). Died in Southampton.

The Finchley Central plaque says that Beck used that station regularly, but, we ask, why that station? Beck lived at 60 Court House Road, close to, and on the other side of, West Finchley Station. So why did he use Finchley Central instead of West Finchley? The Northern Line has undergone some major remodellings, especially in the 1930s, prior to which both stations were connected via Highgate to Finsbury Park, not Camden Town. But that is true of both stations so it's not clear why he would have walked to the more distant one. West Finchley station was rebuilt in the 1930s so it's possible that, for a time, it was out of action. But still, surely the plaque should be at his 'home' station? We've asked Annie Mole and she's passed it on to other tube experts but, so far, no explanation. Any ideas? Via Twitter Keith Miller suggested that there would have been (probably still are) more trains at Finchley Central since two branches join there. That makes sense, except ... we would guess the trains ran to a schedule and he could have timed leaving the house to coincide with a train - he lived only about 400 metres from West Finchley. But maybe there were very few trains on that branch.

This section lists the memorials where the subject on this page is commemorated:
Harry Beck

Fashion designer. Born in Lewisham Hospital, as Lee Alexander, he was known a...