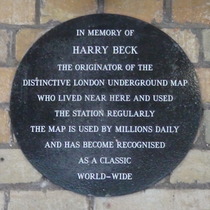 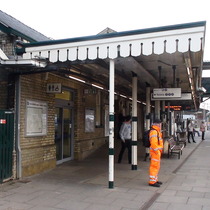 In memory of Harry Beck, the originator of the distinctive London Underground map, who lived near here and used the station regularly. The map is used by millions daily and has become recognised as a classic world-wide.

The plaque can just be made out in our picture, to the right of the door.  The map to the left is a copy of Beck's design, together with the text:

"One man’s vision - A public transport system is of little benefit to its customers if they are unable to find their way around it.  Information needs to be communicated clearly using graphics which are easily recognised and quickly understood.  London’s unique diagrammatic Underground map, first devised in 1931 by Harry Beck, fulfils this objective and can truly be described as a design classic.

Harry Beck was a temporary draughtsman working for the Underground.  He lived near here and used Finchley Central Station regularly.  In his spare time he designed a radically new map of the network inspired by an electric circuit diagram.  The dense central area was enlarged in relation to the outlying areas allowing both to be shown more clearly.

He dispensed with conventional geographical accuracy, aiming simply to enable customers to understand the network clearly and simply.  He used only horizontals, verticals and 45 degree angles.  The Underground lines were represented by different colours.

Initially rejected by the Underground as too ‘revolutionary’, Beck’s map has become an internationally recognised example of graphic and information design excellence.  Many other urban transport systems including New York, St Petersburg and Sydney have used Beck’s concept for their maps.

The map shown on this panel is a reproduction of Harry Beck’s 1933 design – the first to be mass produced in pocket form.  Alongside you will see today’s diagram; although there are more stations and lines operating today, the design has easily adapted to change and growth – a true testament of the genius of its originator."

See Fourthway for a morphing version of the map.

This section lists the subjects commemorated on the memorial on this page:
Harry Beck - Finchley Central

{Stone to the right of the entrance:} This stone commemorating the renovation...

A smaller stone in the lower right corner seems to be part of the overall des...