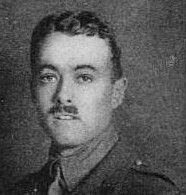 Second Lieutenant Hilary Francis Cleveland Skinner was born on 10 October 1889 in Raipur, India, the elder son of John Allan Cleveland Skinner (1865-1925) and Augusta Beatrice Skinner née Newman (1863-1935). His father was a barrister-at-law, and was a Divisional & Sessional Judge, Central Provinces, India in 1885.

On the night of 1891 census he is shown with his mother staying at The Alexandra Hotel, Railway Street, Hornsea, East Yorkshire. The 1901 census shows him at 39 Beverley Road, Penge, the home of his maternal grandparents Francis and Augusta Newman, with his parents and younger brother John Adrian Dudley Skinner (1891-1965).

He enrolled as a Royal Academy Schools student on 21 March 1911 and according to the Lincolns Inn war memorial he was also a student at Lincoln's Inn. Difficult to believe he was studying at both institutions at the same time, especially two such different metiers. Could he possibly have been studying law during the day and art in the evenings?  He was aged 22 when he joined the RA school, and war broke out three years later. Perhaps he had not been very successful in the arts and so had reluctantly agreed to do what his parents had always wanted, study law. But as he was making this switch war intervened and proved the maxim, 'life (or death, in this case) is what happens when you are making other plans'.

He enlisted in the 10th (Service) Battalion, Royal Fusiliers, also known as the Stockbrokers' Battalion, and gained the rank of Lance Corporal. In July 1915 he was commissioned as a Second Lieutenant in the 1st Battalion, South Wales Borderers Regiment and entered France on 8 March 1916. He was killed in action, aged 26 years, on 25 July 1916 and as he has no known grave he is commemorated on Pier and Face 4A of the Thiepval Memorial to the Missing, Rue de l'Ancre, Thiepval, France.

In November 1917 his father of 209 Anerley Road, Anerley, was sent his army effects totalling £44-5s-0d and on 6 October 1919 his £5-0s-0d war gratuity. He was posthumously awarded the British War Medal 1914-1918 and the Victory Medal. His name is also commemorated on the Penge War Memorial, located at the entrance to Penge Recreation Ground, High Street, London, SE20.

This section lists the memorials where the subject on this page is commemorated:
H. F. C. Skinner