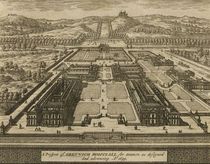 From Greenwich Hospital: "The Royal Charter of William and Mary dated 25 October 1694 established the Royal Hospital for Seamen (latterly known as Greenwich Hospital) as a home for retired seamen of the Royal Navy, and to provide support for seamen's widows and education for their children, and the improvement of navigation. The first Pensioners arrived at Greenwich in 1705. By the end of the century there were more than 2,000 pensioners living there."

It was closed in 1869 and the buildings were then used for navy training.

The site was previously occupied by Greenwich Palace.

This section lists the memorials where the subject on this page is commemorated:
Greenwich Hospital