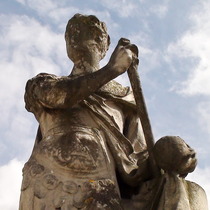 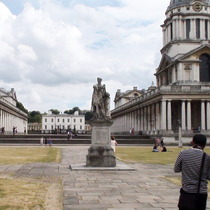 {On the south face of plinth:}
PRINCIPI POTENTISSIMO
GEORGIO SECUNDO
BRITANNIARUM REGI
CUJUS AUSPICIIS ET PATROCINIO
AUGUSTISSIMUM HOC HOSPITIUM
AD SUBLEVANDOS MILITANTIUM IN CLASSE EMERITORIUM
LABORES A REGIS IPSIUS ANTECESSORIBUS FUNDATUM
AUCTIUS IN DIES ET SPLENDIDIUS EX(S)URGIT
JOHANNES JENNINGS EQUES
EJUSDEM HOSPITII PRAEFECTUS
ICONEM HANC PRO DEBITA SUA
ERGA PRINCIPEM REVERENTIA
ET PATRIAM CHARITATE
POSUIT
ANNO DOMINI
MDCCXXXV
{“To the almighty emperor, King George II of Britain, under whose direction and patronage this magnificent hospital, established by the king’s own predecessors to alleviate the burdens of retired seamen, is rising up, expanding and becoming more splendid every day.  Sir John Jennings, governor of the same establishment, placed this image in due reverence for the King and for the love of his country in the year of our Lord 1735.”}

{On the east face of plinth:}
HIC REQUIES SENECTAE
HIS MODUS LASSO MARIS ET VIARUM
MILITIAEQ(UE)
{“Here is a rest for old age, an end for someone who is tired of sailing the seas and fighting.”  From Horace’s Odes (Book 2 Part 6).}

{On the plinth, north (river) face:}
HIC AMES DICI PATER ATQ(UE) PRINCEPS
{“Here may you delight in being called our father and prince” From Horace’s Odes (Book 1 Part 2) and was originally addressed to Emperor Augustus.}

IMPERIUM PELAGI
{“The dominion of the sea”}

{On the west face of plinth:}
FESSOS TUTO PLACIDISSIMA PORTU ACCIPIT
{“This most peaceful place welcomes those who are weary to its safe haven.”  From Virgil’s Aeneid (Book 3 Chapter 4).}

This statue is made of a single piece of marble weighing 11 tons. As was the fashion at the time the king is depicted wearing the military clothes of a Roman Emperor and holding a sceptre and orb.

We are, as ever, grateful to David Hopkins, our Latin consultant, for the translations above. He writes "I was puzzled for a long time by the word EXURGIT/EXUNGIT, which is a key word here. My dictionary says it means 'squeezes out' or 'pours oil on', neither of which make much sense here! After some consideration, I think it should probably say EXSURGIT with an extra S, which means 'rises up' (related to the English word 'surge'). It then starts to make more sense." David always makes Latin seem like a fun puzzle to be solved and leaves us wishing we had stuck with it at school. Only with the translation can we see how well-chosen are the Horace and Virgil quotations, for the location.

The first 3 Georges used Greenwich Hospital as their departure point for Hanover but we can't see that George II was particularly closely associated with the Hospital nor its construction.

The Greenwich Palace plaque is laid into the path leading to the statue from the riverside path, about where the man in the stripy top is standing.

This section lists the subjects commemorated on the memorial on this page:
George II statue at Greenwich

This section lists the subjects who helped to create/erect the memorial on this page:
George II statue at Greenwich

This section lists the other memorials at the same location as the memorial on this page:
George II statue at Greenwich