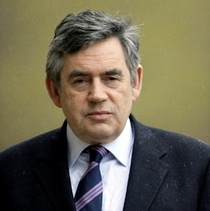 Politician. Born James Gordon Brown in Giffnock, Renfrewshire. Following the death of Labour Party leader, John Smith in 1994, the so-called and much denied 'Granita Pact' took place between Brown and Tony Blair in a restaurant in Islington. Supposedly, the agreement was that Brown would not challenge Blair in the leadership contest, on condition that he would eventually get to be Prime Minister. He had to wait until 2007 when Blair resigned mid-term, leaving him to pick up the pieces. He resigned as Labour leader after defeat at the 2010 general election.

This section lists the memorials where the subject on this page is commemorated:
Gordon Brown

Founded as a result of the Paris Peace Conference at the end of World War I. ...

Born in Essex.  Caught supporting the wrong side when Edward IV assumed the t...