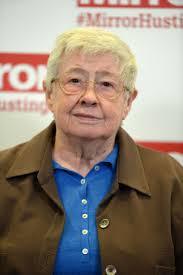 Our colleague Andrew Behan has kindly investigated this woman: Mair Eluned Rees was born on 30 August 1931 in Cardiff or Neath (depending on source) and married Hugh Gervais Garside on 30 July 1954 at Maendy Congregational Church, Maindy, Glamorganshire, whom she had met through the Natiional Association of Labour Student Organisations. They moved to Westminster and lived firstly at 434 Edgward Road, Bayswater before moving in 1956 to 134 Tachbrook Street, Pimlico.

They had three sons, Glyndwr R Garside, born 1959, Owain R Garside, born 1962 and Martin H Garside, born 1965. She represented Woolwich West on the London County Council (1958 - 1961), and then Greenwich (1970 – 1973) and Woolwich East (1973 – 1986) on the Greater London Council. She was Chair of Governors for Waterfield School in Thamesmead and on the Court of Governors of Thames Polytechnic. She became deputy leader (to Ashley Bramall) of the Inner London Education Authority (ILEA) and chairman of the ILEA Development subcommittee. She was awarded the Freedom of the London Borough of Greenwich and later of the Royal Borough of Greenwich and was a member of Westminster City Council from 1996-1998 representing Millbank Ward. Bramall was her agent in the election. She was still active as a candidate in the Westminster City Council election, 2014 at the age of 83. In 2015 she was chosen by the Daily Mirror to appear on a hustings panel for the Labour leadership election, supporting Yvette Cooper. She was the secretary of the Association for Improvements in the Maternity Services in the 1960s and active in many local organisations, taking the role of chair of governors at Pimlico School from 2005-07, and as a director of the Peabody Community Foundation from 2000 to 2011.

She was an active member of Llafur: The Welsh People's History Society and helped to establish a London branch. Garside House (where the plaque is). She died, aged 87 years, on 28 April 2018.

This section lists the memorials created by the subject on this page:
Mair Garside

This plaque commemorates the opening of Garside House by Mrs Mair Garside on ...

Trade unionist and politician. Labour politician for Limehouse in the LCC. Pa...