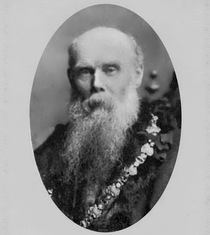 Chairman of Bow vestry in 1900. In this instance, 'vestry' refers to a committee for secular and church government for a parish which met in the vestry of the parish church.

Our colleague Andrew Behan has researched this man and found the photo: Mark Dalton was born in Coggeshall, Essex, the fifth of the nine children of Jacob Dalton and Rachel Dalton nee Willet. His father was an Inn Keeper & Smith. The 1851 census shows the family living in Stoneham Street, Coggeshall, but the 1861 shows him living with his one of his brother's family at Springfield Hill, Chelmsford and his occupation was given as an Apprentice to a Printer. On 19 September 1869 he married Emma Eliza Hitchens at St John of Jerusalem Church, South Hackney and they went on to have four children. His occupation was recorded as Compositor. The 1871 census lists the family as living at 15 Norman Road, North Bow, his occupation being a Printers Compositor and the 1875 Electoral Register confirms that he was occupying four rooms on the first floor of the house. By 1879 he had moved to 311 Old Ford Road, Bow and the 1881 census shows he was now a Master Printer employing one apprentice. The 1884 Electoral Register shows that he was now living at 520B Old Ford Road, Bow and in 1887 he moved to 340 Old Ford Road, Bethnal Green where he was to remain for the rest of his life. In 1904 as an Alderman of Poplar Borough Council he was elected as the Mayor and in 1907 he was appointed by the Lord Chancellor as a Justice of the Peace. At the 1918 general election he stood as a candidate for the break-away Independent Liberal Party for the Poplar, Bow and Bromley constituency running against the war-formed coalition government. The coalition won a very large majority and Dalton was badly defeated, losing his deposit. His wife died in early 1921 and he died at home later that year on 17 September, aged 75 years. Probate was granted and his estate totalled £865-1s-10d.

This section lists the memorials created by the subject on this page:
Mark Dalton

Anarchist activist and author.  Born Italy died, with her baby, in childbirth...