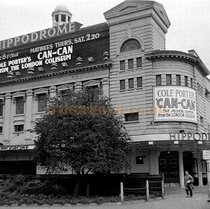 Former theatre. Built by Bertie Crewe as a 3,000 seat music hall. It became famous as a venue for travelling shows before and after their West End appearances, featuring some of the biggest names of the day. In 1969, the BBC took out a long lease on the theatre and converted it into a radio studio and concert hall. It became home for the BBC Concert Orchestra, and also saw broadcasts and concerts from the BBC Big Band and Radio Orchestra. They left the premises in 2003, and it is now owned by the Christian group El Shaddai International.

This section lists the memorials where the subject on this page is commemorated:
Golders Green Hippodrome