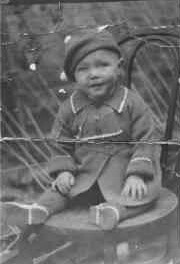 Gloria Caroline Holmes was born on 23 September 1941 at St Martin's Hospital, Bath, Somerset. She was the daughter of James Robert Holmes (1904-1944) and Caroline L. Farmer (1921-1944). Her father was a Gunner in the Heavy Anti Aircraft Regiment, Royal Artillery, service number 1476811, but was not married to her mother.

Her birth certificate shows her mother as 'Mabel Caroline Holmes formally Farmer' and that she was living at 9 Barrow Road, Bath.

All four names are commemorated in the Civilian War Dead Roll of Honour that is kept just outside St George's Chapel at the west end of Westminster Abbey.

This section lists the memorials where the subject on this page is commemorated:
Gloria Holmes