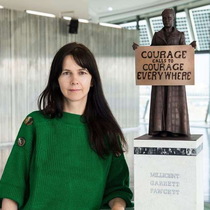 Artist. Gillian C. Wearing, CBE, RA, was born on 6 December 1963 in  Birmingham, Warwickshire, (now Birmingham, West Midlands), a daughter of Bryan J. Wearing and Jean R. Wearing née Gregory. She came to London to study at the Chelsea School of Art and was the winner of the 1997 Turner Prize. In 2007 she was elected as lifetime member of the Royal Academy of Arts in London.

This section lists the memorials created by the subject on this page:
Gillian Wearing

Artist and designer. Born in Great Falls, Cascade County, Montana, USA. As an...