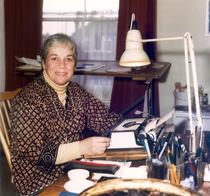 Illustrator. Born in Harrow, Margaret Fortnum has illustrated about 80 children's books, most famously the Paddington series from the beginning to 1974.

Andrew Behan has researched Fortnum: Margaret Emily Noel Fortnum, (known as Peggy Fortnum), was born on 23 December 1919 in Harrow, Middlesex, the youngest of the six children of Lieutenant Commander Arthur John Fortnum R.N.R. and Mary Georgina Fortnum, née Hay. Her father was an Advertising Manager for the Lemco & Oxo Company. Electoral registers from 1919 to 1922 show the family living at 11 Hamilton Road, Harrow, but from 1923 the family resided at 6 Marlborough Hill, Harrow. Educated at St Margaret's School, Harrow, in 1939 she enrolled in the Tunbridge Wells School of Art. 1940 saw her join the Auxiliary Territorial Service but she was injured when she fell through a broken door of a troop carrier and her leg was run over by a lorry. The army admitted liability and gave her a grant which enabled her to enrol at the Central School of Art in London.

This section lists the memorials where the subject on this page is commemorated:
Peggy Fortnum

{The statue has two integral texts: On a label stuck to the suitcase:} Wanted...