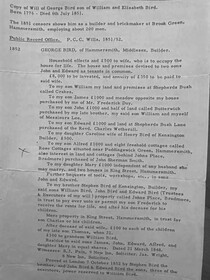 Builders and brick makers in West London. Considering their contribution to many prominent projects (listed on the plaque), it is surprising that there is no information available on them.

We first published this in July 2011 but subsequently our colleague, Andrew Behan, has undertaken some research on the family. He could find no image of the Bird family, but instead we have used a transcription of George Bird's will which we think proves this to be the people concerned.

On 1 October 1803 he married Mary Wright (1785-1857) at St Botolph's Church, Aldgate, London, where the marriage register shows that they were both of this parish. In 1804 he was assessed to pay 15 shillings as Land Tax in the Hamlet of Hammersmith for property north of the Great Western Road. Also in that he year he was initiated as Freemason into the Caveac Lodge No.232 that met in the Angel Public House, King Street West, Hammersmith and he was recorded in their register as aged 30 years, a bricklayer, residing in Hammersmith.

In the 1841 census he is described as a builder living at Brook Green, Hammersmith, with his wife and two of their sons: Frederick, a coachmaker and Edward, a builder, together with two female servants. When the 1851 census was compiled he was shown as builder & brickmaker employing 200 men, still residing in Brook Green, Hammersmith, with his wife, their son John, who was also described as a builder, their daughter Mary, together with a cook and a housemaid.

This section lists the memorials where the subject on this page is commemorated:
George Bird and family

2019: The Hammersmith and Fulham Historic Buildings Group tell us that this p...

The largest provider of affordable and supported housing in Camden, with almo...