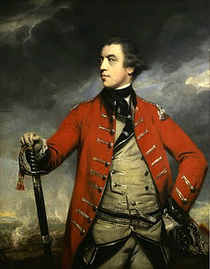 Army officer, politician and playwright. Born at Park Prospect, Westminster. He entered the army in 1740 and in the Seven Years War he captured Valencia de Alcantara. During the Saratoga Campaign in the American War of Independence, he surrendered his army of 5,000 men. Fought at Bunker Hill and in 1777 led an expedition to Canada and took Ticonderoga. He entered parliament in 1761, where he investigated corruption in the East India Company. Commander-in-Chief in Ireland 1782-1783. As a playwright, his works include 'The Maid of the Oaks' and 'The Heiress'. Father of John Fox Burgoyne. Died at his home, 10 Hertford Street.

This section lists the memorials where the subject on this page is commemorated:
General John Burgoyne

The Oxford Dictionary of National Biography gives his birth year as 1723.

Served in the Royal Navy in 1944-8.  Entered business and was the founding me...