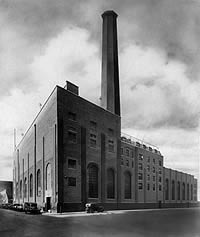 Gainsborough Pictures was founded in 1924 by Michael Balcon. These Islington studios were closely related to those at Lime Grove, used by Gaumont-British, with Balcon as Director of Production for both.

The Islington studios were built as a power station for the Great Northern & City Railway and later converted to studios.

The studio's opening logo, of a lady in a late 18th century costume, sitting in an ornate frame, and turning and smiling, was based on the 1785 portrait of Sarah Siddons by Thomas Gainsborough.

The studios were active 1924 - 49. However, the tall factory chimney was considered dangerous during the WW2 bombings, so Gainsborough Studios was evacuated to Lime Grove for the duration of hostilities.

These buildings were largely left derelict from 1949 until 2002 when their conversion into luxury flats began, completed in 2004.

This section lists the memorials where the subject on this page is commemorated:
Gainsborough Film Studios