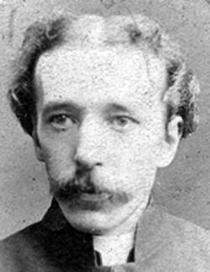 Priest. Born Hackney, the eldest son of Frederick Richards and grandson of Anne Richards. Arrived in Newlyn in 1869 as a lay helper. Through his efforts the bridge and east window to St Peter's Church in Newlyn were restored. From Newlyn he went to Lichfield Theological College where he was ordained Deacon by the Bishop of Chichester in 1872, after which he held the curacy of Wadhurst for six months. He provided much service to the parishioners who presented him with a testimonial when he left the following year. Spent the winter of 1873 in Nice recuperating and upon return spent the following two years in Hastings before being ordained a Priest in 1876 on Trinity Sunday.

Married Mary Campbell Dunnington-Jefferson of Thickett Priory in Yorkshire. Their eldest and only surviving son, John Charles Field-Richards was a motorboat racing Double Gold Medal winner in the 1908 Olympics. Frederick was appointed to the chaplaincy in Toulon, finally coming to Talland near Looe in Cornwall where he spent his last year. Buried in Hastings Borough Cemetery with his father and mother. Known as "Mr Field" to his parishioners in Newlyn where a memorial was erected to him in the church of St. Peter's. He was the first to use the name "Field-Richards" and the family still exists today.

This section lists the memorials where the subject on this page is commemorated:
Frederick Field-Richards

Vicar of St Sepulchre Middlesex in 1868.

1841 an assistant chaplain in Madras, India. Vicar at St Matthias from at lea...

The church was in existence from at least the early 12th century. At the refo...