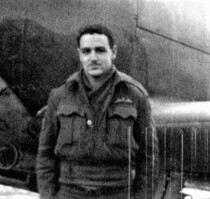 Flight Sergeant Frederick Carleton Austin was born on 22 August 1918 in Omaha, Nebraska, USA, the younger child of Captain John Buchanan Austin (1886-1918) and Erminie Idah Buchanan née Calvin (1895-1983). His elder sister was Frances Jane Austin (1917-2010) and their father was killed in October 1918 whilst serving in the 38th US Infantry in France.

United States Federal Census returns in 1930 and 1940 show him listed with his family in Los Angeles, California, USA.

The American Air Museum in Britain website outlines his life that shows he joined the Royal Canadian Air Force, service number R58580, obtaining the rank of a Flight Sergeant. He served in two Royal Air Force Eagle Squadrons, initially No.133 Squadron before being transferred to No.121 Squadron.

On 17 April 1942 he was flying his Spitfire aeroplane, serial number AD498, on a sweep over the Saint-Omer region of France when he was shot down by German fighters from the Jagdgeschwader 26 wing and crashed at Hardinghen, France. He died, aged 23 years, and was buried in the Military Plot, Grave 4, within the churchyard of St. Marguerite, Hardinghen.

He is also commemorated on the Commonwealth War Graves Commission's website and on page 56 of the Veterans Affairs Canada's Book of Remembrance.

This section lists the memorials where the subject on this page is commemorated:
Frederick Austin

Private Frederick Elwyn Calderon was born in July 1873 in Marylebone, the six...

From Riverside, Ontario, Canada.  Aged 26.  Burried in the Warriston Cremator...