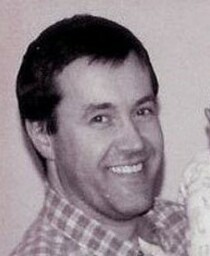 He moved to Canada when he was aged 8 years and on 29 September 1990 he married Abigail Carter in Toronto, Canada. Initially they lived there before moving around to Brussels, London, Massachusetts and finally in Montclair, New Jersey. They had two children, Olivia Dack b.1995 and Carter Dack b.1999.

He was the senior vice president and the director of global sales and alliances for Encompys, a consulting agency for ecommerce brands and business owners..

He died, aged 39 years, on 11 September 2001 when attending a trade show in The Windows on the World Restaurant on the 105th Floor, North Tower, 1 World Trade Centre, Manhattan, New York, USA.

This section lists the memorials where the subject on this page is commemorated:
Caleb Arron Dack

Miriam Jill Hyman was born on 30 November 1972 in the University College Hosp...