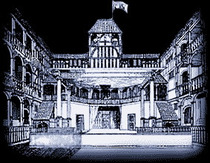 Knowledge of London says: "One of the earliest theatres, the Fortune Theatre . . . was first opened in 1600 by Philip Henslowe and Edward Allen. It burnt down in 1621 and was rebuilt soon afterwards only to be destroyed again by fire in 1649 only this time deliberately by a fanatical Puritan soldier."

This was clearly a theatrical area, since, nearby on the corner of Fortune Street and Golden Lane was a Nursery - a training school for young actors. Samuel Pepys’ diary entry for 2nd August 1664 reads :
"I chanced to sit by Tom Killigrew {a dramatist and theatre manager}, who tells me that he is setting up a Nursery; that is, is going to build a house in Moorefields, wherein he will have common plays acted. But four operas it shall have in the year, to act six weeks at a time; where we shall have the best scenes and machines, the best musique, and every thing as magnificent as is in Christendome; and to that end hath sent for voices and painters and other persons from Italy".

The Fortune Theatre in WC2 was named after this one.

This section lists the memorials where the subject on this page is commemorated:
Fortune Theatre - EC1

{Above a stylised picture of two performers:} Fortune Theatre. A 'jewel of a ...

Actor. Born Jessie Alice Tandy in Upper Clapton. She appeared in over 100 sta...

Founded by Ashley Dukes as a new stage for plays by poets. The plaque gives ...