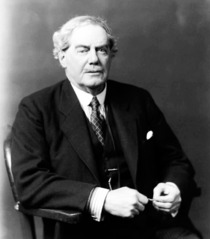 Politician. Born Charles Benjamin Bright McLaren in Edinburgh. He began his career in journalism before turning to the law. Elected as an M.P. in 1880. Member of the Privy Council. Became Baron Aberconway in 1911.

Chairman of the Metropolitan Railway Company, amongst others.

This section lists the memorials created by the subject on this page:
First Baron Aberconway

This plaque is somewhat reticent about its function which is to commemorate t...

Signage company. It was named after their concept called the 'brilliant lette...