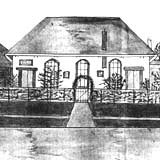 The Moravian leader in London, Peter Bohler, established the Fetter Lane Society in May 1738 (- 42 depending on source).  Most of the members were Anglicans.  Attendees included John Wesley, Charles Wesley, Zinzendorf, the parents of William Blake and Emanuel Swedenborg.  Wesley had a doctrinal disagreement with the Moravians and broke away, taking about 50 other members with him, to form the Foundery Society before eventually establishing the Methodist Church.

Our picture apparently shows the Fetter Lane building, 1831. It was destroyed in WW2. We find it very difficult to believe that such a cottagey building existed in Fetter Lane in 1940, in that form, but we can find no other pictures.

The loss of the building did not end the congregation: the Fetter Lane Moravian Congregation continues to meet in London.

This section lists the memorials where the subject on this page is commemorated:
Fetter Lane Society

Anglican clergyman and hymnist. Born the son of a lawyer at 12 Serjeant's I...

Roman Catholic priest.  (Not the American boxer despite what Wikipedia says.)...