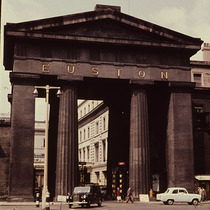 The massive Doric arch, designed by Philip Hardwick, was the entrance to the original 1837 Euston Station which was on Drummond Street (which used to run further east than it does now) quite close to what is now Eversholt Street. Stanford's 1870ish map shows it. It was demolished in 1961 as part of the redevelopment of the station. Some of the stones from the arch were dumped in the River Lea and some of these were retrieved in 1994 and displayed in Euston Square in 2015.

The picture source provides all the history, with pictures. And more at Cabinet Room.

The National Railway Museum in York holds the ornate iron gates and other items from the old Euston Station.

This section lists the memorials where the subject on this page is commemorated:
Euston Arch

Aged 34 when he died. Probably worked at London Bridge station for British Ra...

Constructed by the Underground Electric Railways Company of London, between B...

Invented and patented by Joseph Hansom. This horse-drawn carriage, or cabriol...

A terminus of the London and Greenwich Railway, London's first railway. The o...

This is, approximately, the area where the Greenway crosses the River Lea, E3...