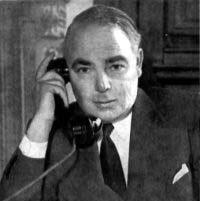 Born Isaac Leslie Belisha in London. Politician. His widowed mother married Sir Adair Hore in 1912, and the surnames were merged. Entered parliament as a Liberal in 1923, and became minister of transport in 1934. In this tenure, he backed the introduction of illuminated orange globes on top of black and white posts at public crossing points. These were instantly christened 'Belisha' beacons. He was part of Neville Chamberlain's government, but was dismissed in 1940, with the suggestion that he had helped drag Britain into the war in order to protect European mainland Jews, (He himself was Jewish). Elevated to the peerage in 1954. He appears as a would-be peacemaker in the H.G.Wells novel 'The Shape of Things to Come'.
Died, Rheims, France.

This section lists the memorials where the subject on this page is commemorated:
Lord Hore-Belisha

From British History Online we've learnt that lordships are something that co...