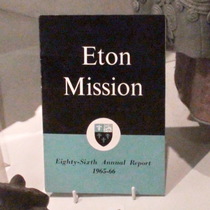 The private boys school Eton College launched a scheme to provide social and religious support to people living in Hackney Wick and to familiarise privileged schoolboys with social conditions in deprived areas. "Eton Mission" was started in 1880.

2018: We saw this publication "Eton Mission - Eighty-Sixth Annual Report 1965-66" at historical exhibition at Eton School, where there was also an information board with the following text: "The core focus of charitable activity used to be The Eton Mission, founded in Hackney Wick in 1880. Boys contributed money and were encourage to visit the mission, and Old Etonian volunteers played a large role in organising the various clubs and activities attached to it."

Villiers Park gives some photographs and some history: "1909, when a group of Old Etonians started a sports and social club called the Eton Manor Boys’ Club. It gave ordinary boys living on the fringes of London’s notorious and deprived East End the chance to enjoy sports and games in a safe, spacious environment. From boxing and billiards to debating and drawing, the opportunities were varied and exciting. The Manor Charitable Trust was set up in 1924 to help fund the club’s work. The men behind that: Arthur Villiers, Gerald Wellesley, Alfred Wagg and Sir Edward Cadogan {6th son of the 5th Earl}. From this, our educational work started to evolve.  In 1951, Sir Edward Cadogan began running educational courses for club members from his Oxfordshire home. When he died in 1962, Arthur Villiers picked up the helm, paying tribute to his friend by expanding the number of courses available. An educational centre was set up in Middleton Stoney in Oxfordshire, with the first course held in December 1965. When the Boys’ Club closed in 1967, these subject-based courses were offered, for free, to students from state and independent schools all over the country. Following Arthur Villiers death in 1969, the education programme expanded considerably, until 20 years later when the trustees decided to build a second study centre at Foxton, near Cambridge." Later it became the Villiers Park Educational Trust.

The BBC also has some photos and gives: "The Eton Manor Sports Club opened in 1913, and was supported by Edward Cadogan, Arthur Villiers, Alfred Wagg and Gerald Wellesley. The clubhouse was set up for children living in Hackney Wick, who were taught athletics, boxing, drama and debating. Eton was the first of all the public schools in England to set up a mission in London in the early 1880s. The area chosen for help was a region about the size of the Eton playing fields, in between the Hackney Marches and the North London railway. The 6,000 men, women and children who lived there were described at the time as being 'of the very poorest' class. The club taught athletics, boxing, drama and debating The Berkshire public school set up a Mission church, two boys' club, choir, men's club and Sunday school in this area. These boys clubs eventually merged to become the Eton Mission Boys' Club, which ran from 1913 to 1967."

The club fell into disrepair and use ceased. It was used as the temporary home of a construction college before being levelled to become an Olympic venue. Many of the graduates from the centre were hired to work on the Olympic Park. The club was transformed into a Paralympic venue and after the Games Eton Manor was left with a rich mix of sporting facilities for local and regional communities.

At Wikipedia we learn that the mission church, St Mary of Eton (now called St Mary of Eton with St Augustine), is on Eastway, just north of Victoria Park, some distance away from the war memorial site. The 'Manor' part of the name comes from the Manor Farm which was bought in 1912 to build a new sports clubhouse. "Villiers remained the primary guiding force behind the club until its closure. He lived at Eton Manor Boys' Club from 1913 until his death in 1969. ... The club only accepted boys who had been members of the Eton Mission Boys' Club. ... In 1920 an old rubbish tip site at the eastern end of Hackney Marshes was converted into the Club's new sports ground; it became well known as 'The Wilderness'" This explains the distance between the church and the grounds.

Another Wikipedia page gives the location of the Eton Manor RFC, and the name: "The New Wilderness". We cannot discover when this was created, only that a new clubhouse was built in 1996.

Leyton and Leytonstone History Society have produced a history of the club: Taking it on the Chin.

This section lists the memorials where the subject on this page is commemorated:
Eton Mission and Eton Manor Clubs