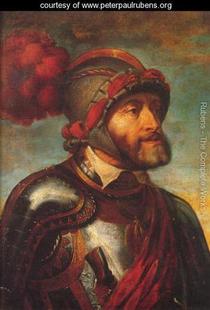 Born Ghent. Ruled over large chunks of Europe and the Spanish colonies in America, the Caribbean, and Asia. Catherine of Aragon was his aunt, and so, despite Henry VIII and Charles being allied for many military purposes, Charles V, who had the Pope effectively imprisoned and so under his control, prevented the Pope annulling Henry's marriage to Catherine. Abdicated in 1555 and died in a monastery in Spain.

We can find no evidence that Charles V ever came to England (as suggested at the Black Friar pub) and it surely would have been a visit with much pomp, unlikely to go unrecorded.

This section lists the memorials where the subject on this page is commemorated:
Emperor Charles V

Sixth son of King George III. 1840 he gave away Queen Victoria in marriage to...