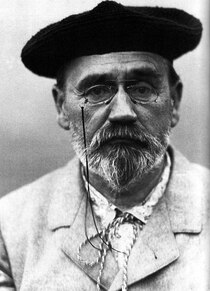 French novelist, playwright, journalist. Born Paris but when he was three the family moved to Aix-en-Provence where he was brought up and where he became friends with Paul Cézanne . When he was 18 the family. returned to Paris.

1895 took up photography and his work is highly regarded.

In 2020 while Michael Rosen was in hospital surviving coronavirus we were thinking of him as we read his marvellous book ‘The Disappearance of Emile Zola’. Zola’s life was turned upside down by his involvement in the Dreyfus affair, which the book covers very well but we will not attempt to explain that. We read the book to learn about Zola’s life in London and we discovered other aspects of his life as well.

Zola had no children with his wife Alexandrine (1841 - 1925) but had 2 with his long-term mistress, Jeanne (1867 - 1914). In effect Zola was the head of two households which he arranged always to be close enough for him to live with his wife and make daily visits to Jeanne and the children. The affair had begun in 1888 and from 1891 his wife knew about Jeanne the children. She seems to have accepted the children, discussing them with Zola in letters and even having them to stay on occasion. But with neither woman did Zola openly discuss the other, in letters, at least.

Zola was in London on two occasions: 1893 and 1898-9. On the first visit he was invited to attend the annual congress of the Institute of Journalists. He and his wife were there for 10 days, 20 September – 1 October, staying at the Savoy and being feted and treated as guests of honour. Transpontine writes "... he was deemed sufficiently a literary celebrity to be honoured in one of the regular grand fireworks displays at the Crystal Palace.... a 'Fire Portrait of Emile Zola with motto "Welcome" (Patrick Beaver, The Crystal Palace: a portrait of Victorian enterprise, 1986)."

In 1898 Zola was tried in Paris and on 18 July was in imminent danger of being sentenced to imprisonment. He and his friends decided that it was best for him to escape to England, which he did, arriving at Victoria station on the morning of 19 July. He stayed at the Grosvenor Hotel where, registered as M. Pascal, he was “… given a room on the fifth floor, whose window was blocked by the fretwork frieze which adorns the huge building …” {Zola letter quoted by Rosen}.

While in Central London he found the lion that he remembered glimpsing through the fog on his earlier visit – it was the Lion Brewery Lion, now better known as the South Bank Lion.

21 July Zola took the train from Waterloo to Wimbledon and from there to the Oatlands Park Hotel Weybridge where his room was in the tower. From that base he went house-hunting and found Penn, a detached house in Weybridge sitting back from the road. He moved in on 1 August. Here Jeanne and the children joined him. This was the first time that they had ever lived together. Meanwhile Alexandrine was in Paris managing Zola’s literary and financial affairs. 27 August the Penn lease expired so the family moved to Summerfield, a house in Addlestone. 10 October they moved briefly, to The Bailey’s Hotel, Gloucester Road, from where Jeanne and the children returned to France on 15 October.

Zola moved to the Queen’s Hotel (which boasts the plaque) in Upper Norwood under the name ‘M. J. Richard’. Initially he was in rooms overlooking the back garden but when the trees lost their leaves he moved to rooms on the top floor overlooking the road. With one brief exception this is where he stayed until his return to France in June 1899. The exception was when his second wife came to visit - the management at the Queen's Hotel might not have found that acceptable behaviour.

Alexandrine was with Zola in Queen’s Hotel 25 October – 5 December and 22 December – 27 February. Jeanne and the children were with Zola 29 March – 11 April, at the Crystal Palace Royal Hotel under the name ‘Roger’. Zola returned to the Queens Hotel on 18 April and on 4 June he left finally for Paris.

Zola was in London, 19 July 1898 - 4 June 1899, 10 and a half months. It can’t have been planned but during this time, give or take a week or two, he equally divided his time three ways: on his own; with his wife; with his mistress and children.

His friends looked after him and often visited from Paris. He was sometimes worried about being recognised but that did not stop him writing and enjoying his hobbies: cycling and photography. When he arrived his English was minimal but as time went on he learnt at least enough to read the all-important newspapers. He thought our capital ‘I’ (contrasted with the French 'je') might explain our national character. Zola was not enamoured with England and the English. He did not like: our shutterless sash windows; our women’s carelessness with hairpins (so many on the pavement); and, no surprise, our food.

Zola died at home in Paris of carbon monoxide poisoning caused by an improperly ventilated chimney. Being such a controversial figure there are suggestions that he was assassinated by the chimney being deliberately blocked. Following Zola’s death Alexandrine corresponded with Jeanne and supported the two children financially. In 1906 she made legal arrangements for their surname to become Emile-Zola.

Oddly, the spy who was guilty of the crime for which Dreyfus was accused, Ferdinand Esterhazy (1847 –1923), also chose self-exile in England. He came to London in September 1898 and in 1909 settled in Harpenden where he stayed until his death.

This section lists the memorials where the subject on this page is commemorated:
Emile Zola