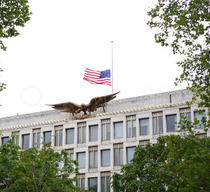 Embassy of the United States

The first US Minister to the Court of St James, John Adams, rented No 9 Grosvenor Square in 1785. After that the American Embassy in London was situated variously in Great Cumberland Place, Piccadilly, Portland Place and Grosvenor Gardens. In 1938, it moved to 1 Grosvenor Square. The current (heavily defended) building in Grosvenor Square, designed by Eero Saarinen, opened in 1960. There are plans, 2013, to relocate to an even more secure site in the Nine Elms area of London.

This section lists the memorials where the subject on this page is commemorated:
Embassy of the United States

This section lists the memorials created by the subject on this page:
Embassy of the United States

On this site in September 1773, A. Bell Booksellers published a volume of poe...

It was formed in the aftermath of the invasion of Poland by Germany in 1939 a...

Naval officer.  Born Dorset.  Present on Nelson's ship at the Battle of Trafa...