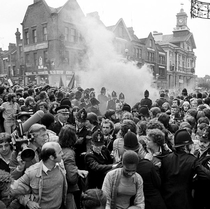 The 2019 film White Riot contains extensive footage of the events that day.

Bostock.net has an obituary and some photographs, and supplied the informatio...