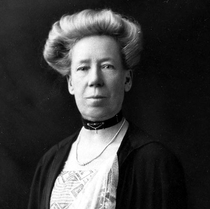 Philanthropist. Born Elizabeth Mary Taylor at 3 Elm Place, Peckham Rye. She and her husband George Cadbury developed the Bournville village near Birmingham. In 1909 she opened the Woodland Hospital, which became the Royal Orthopaedic Hospital, Birmingham. She also built The Beeches, Birmingham, to provide holidays for slum children. Throughout her life she campaigned for the education and welfare of women as a non-militant suffragist. Died at the Manor House, Northfield, Birmingham.

This section lists the memorials where the subject on this page is commemorated:
Elizabeth Cadbury