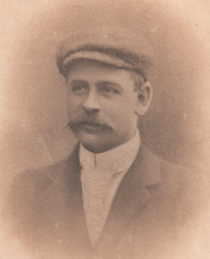 Edwin Root Sewell was born in 1867 in Great Baddow, Chelmsford, Essex, the sixth of the nine children of Samuel Sewell and Sarah Sewell née Wood. His birth was registered in the third quarter of 1867 in Chelmsford and he was baptised in Great Baddow on 8 September 1867. His father was a Wind Miller. The 1871 census shows him living at Galleywood Common, Great Baddow with his parents, six of his siblings and a domestic servant. He was still there at the time of the 1881 census.

On 7 January 1898 their second son, Colin Edwin Sewell, was born, but he was not baptised until after the death of his father who died, aged 31 years, on 25 February 1899 whilst driving a Diamler petrol driven motor car in Grove Hill, Harrow and was buried on 3 March 1899 in Plot E224 at Twickenham Cemetery, Hospital Bridge Road, Twickenham, TW2 6LD. Probate records dated 13 April 1899 show that at the time of his death he had been living at 3 St Margaret's Grove, Twickenham, Middlesex. Administration of his estate was granted to his widow and his effects totalled £156-15s-0d.

Interesting that 1895-7 Daimler had their factory on Eel Pie Island, close enough to Teddington and Twickenham for Sewell to have worked there.

This section lists the memorials where the subject on this page is commemorated:
Edwin Root Sewell