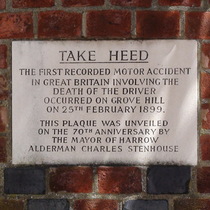 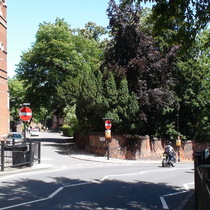 Take Heed
The first recorded motor accident in Great Britain involving the death of the driver occurred on Grove Hill on 25th February 1899.
This plaque was unveiled on the 70th anniversary by the Mayor of Harrow, Alderman Charles Stenhouse.

Londonist reports: "According to a local press report, 'While the car was going down Grove Hill at a high speed the front wheel collapsed, and the occupants were violently thrown out.' The driver, Edwin Root Sewell (31), died instantly. A passenger called Major Ritche died later from a fractured skull, and a further four passengers received minor injuries.

It was a tragedy, but the plaque is incorrect — the accident was not the first of its kind. A whole year earlier, one Mr Henry Lindfield lost control of his motor wagonette during a drive in Purley. His vehicle ran through a wire fence before hitting a tree, mortally wounding him. There is no plaque commemorating Mr Lindfield's crash, makes us wonder why Harrow was so desperate to claim the unenviable first motor accident, considering it isn't Harrow's to own."

Londonist also reports another, even earlier, traffic death, this time of a pedestrian, Mrs Driscoll in 1896, within Crystal Palace Park. We don't believe any commemorative plaque has been raised to Mrs Driscoll.

The first railway death is reportedly William Huskisson, 1830. And 2018, the first external death caused by an autonomous vehicle, in Arizona, Elaine Herzberg. Driverless Futures reported that Uber, the company responsible for the vehicle, agreed an out-of-court settlement with the victim’s family but, as far as we can see, no legal penalties were imposed, no one was held responsible for the death.

2020: Our colleague Andrew Behan found information about the driver (Sewell), the passenger (Richer) and the car, and also Grace's Guide, which explains the apparent inaccuracy on the plaque, as noted by Londonist. Lindfield was the first death in a motor vehicle but his car was electrically-driven. Sewell and Richer were the first deaths in a petrol-powered motor vehicle. With the re-appearance of electric cars in the 21st century it will surprise some that in the 1890s they were as common on the roads as petrol-driven cars (remember VHS vs Betamax?). How different would our world be if the electric cars had won out?

According to the local press report found by Londonist a further four passengers received minor injuries. We've not found other references to these people and, looking at the car, we doubt it could hold a total of 6 people safely... ah... perhaps that contributed....?

This section lists the subjects commemorated on the memorial on this page:
First driver killed in road accident

Edwin Root Sewell was born in 1867 in Great Baddow, Chelmsford, Essex, the si...

This section lists the subjects who helped to create/erect the memorial on this page:
First driver killed in road accident

We know no more about this plaque than what Ornamental Passions discovered: i...