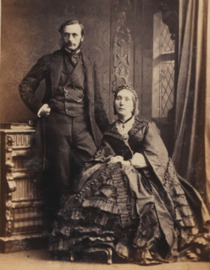 There is much of interest in this man's life. Born the son of a career diplomat who served for a time as Governor of Hong Kong, his mother was poisoned with arsenic whilst in Hong Kong and died in England from its after effects. A dazzling career, the Registrar of the Board of Trade and translator of the German poets. One of the Secretaries to the Commissioners for the Great Exhibition 1851 and responsible for the Chinese display at the exhibition, he worked with The Prince Consort in connection with the subsequent construction of buildings financed from the profits of The Great Exhibition. Was awarded a Companion of the Most Honourable Order of the Bath, admitted to the Freedom of the City of London, elected as a Liberal Party member of parliament, but who later suffered from a mental illness, dying in a mental hospital.

Over the years from 1851 to 1911, the English census forms had a column to record every person who suffered from some forms of disability. The categories changed over the 60 years, but they included:- blind, deaf, dumb, feeble-minded, idiot, imbecile and lunatic. The 1901 census shows Edgar Bowring unfortunately suffering as a 'Lunatic', the most severe form of the listed mental classifications.

Edgar Alfred Bowring was born on 25 May 1826 in Hackney, the third son and the fourth of the nine children of Sir John Bowring (1792-1872) and Maria Bowring née Lewin (1794-1858). His father was a diplomat and from 1850 to 1859 was the Governor of Hong Kong. His mother died in Somerset from the effects of arsenic poisoning having eaten contaminated bread in Hong Kong in what was known as the Esing Bakery Incident or the Ah Lum Affair in which 500 Europeans in the crown colony were poisoned by loaves from a Chinese bakery.

His wife died on 4 September 1857 at their home in Clapham Park, just two months after the birth of their daughter and probate records showed her estate to be under £300 when letters of administration were granted to her husband on 1 March 1858.

The 1861 census informs that he was living at 69 Westbourne Terrace, Paddington, with his wife, their son, a nurse, a footman, a cook and a housemaid. His occupation was recorded as the registrar to the ;Board of Trade and secretary to Her Majesty's Royal Commission for the Great Exhibition of 1851.

On 29 April 1865 he was made a Companion of the Most Honourable Order of the Bath (C.B.) and on 9 March 1866 he was admitted to the Freedom of the City of London, by patrimony, in the Worshipful Company of Fishmongers.

As a member of the Liberal party he was from 1868 to 1874 one of the two members of parliament for the Exeter, Devon, constituency.

The 1871 census confirms that he was still living at 69 Westbourne Terrace, Paddington, together with his wife, their younger son, a nurse, a footman, a cook and two housemaids. His occupation was listed as 'Companion of the Bath & M.P.' Electoral registers and local directories show him at this address until at least 1885, but from 1890 he was listed at both 30 Eaton Place, London and 5 Lewes Crescent, Kemp Town, Brighton, Sussex.

The 1891 census shows that he was boarding at the home of Doctor Stanley A. Julius and his wife Jeanette Julius at 19 Cornwall Gardens, Hastings, Sussex and his occupation was recorded as 'living on his own means'.

The 1901 census classified him as a 'lunatic' and he was residing under the control of Doctor Henry Drake Palmer, at 'Stourbank', Bear Street, Nayland, Suffolk.

He died, aged 85 years, on 8 August 1911 at Barnwood House, Gloucester, a private mental hospital, and was buried on 10 August 1911 in the churchyard of St. Bartholomew, Churchdown, Gloucester.

Probate records confirm that his address was 30 Eaton Place, London and that he died on 8 August 1911 at Barnwood House, Gloucester. Probate was granted on 13 October 1911 to his eldest son, The Reverend Edgar Francis Bowring and his second son, Algernon Cunliffe Bowing and that his effects totalled £56,404-0s-7d.

The 1861 photograph shows Bowring with his second wife.

This section lists the memorials where the subject on this page is commemorated:
Edgar A Bowring