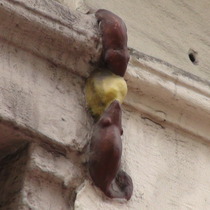 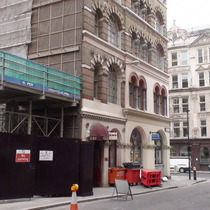 Cabbies are attempting to propagate a myth that these mice commemorate two builders who died while working on the nearby Monument.  We can find no reputable evidence for this (and we well remember the stories that cabbies spread about one of the Noses of Soho being in honour of Wellington). Why would the Victorians who put up this building want to commemorate two dead construction workers from the 17th century? How did they even know of their existence? Is this the type of memorial for which the Victorians are renowned (compare and contrast the Albert Memorial)? So it's still an open question why these mice are here, and what, if anything, they commemorate.

The mice are at ground floor cornice level at the juncture between number 13 Philpot Lane (Jamies) and 23 Eastcheap (Caffe Nero).   The shells are on number 13, below the ground floor cornice.  Italian gothic in style, the two addresses are parts of the same, listed, building.  Geograph has a fine photo and architectural appreciation and says "It was built in 1861-62 as offices and warehousing for Messrs Hunt & Crombie, spice merchants. The architects were John Young & Sons."  Which confirms the contents of two of the shells, and we have no reason to doubt the third.

This section lists the other memorials at the same location as the memorial on this page:
Carved mice

This type of information is not normally recorded on this type of building. ...