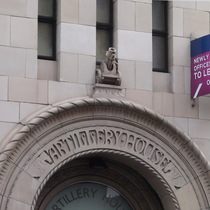 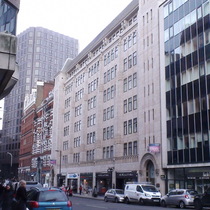 Admiring these charming toy-like cannons we realised they could be taken as a memorial to the use of this site for firing practice.

We could not find a single source for the history of this site so we've cobbled one together from various sources.

John Strype's 1689 map shows the whole western half of this block occupied by “the new artillery ground”. It was used by the men of Westminster to practice archery, as they were obliged to do. Maps shows that it was still an open enclosure (if you see what we mean) in 1723. By 1828 it was built up and occupied by the Artillery Brewery run by J. Carter Wood from 1850s - 1889 when Watneys took it over and it ceased brewing.

An 1891 insurance map shows the site occupied by the expected row of small scale commerical premises with a cab yard and stables behind. The story is confused in 1899 by the construction of Artillery Mansions but this massive block, still there, is on 75 Victoria Street, a close neighbour (on Victoria Street) but not our site. In 1928-30 the current building with the cannons was erected, designed by Maurice Webb, son of Sir Aston, and H. A. Dawson.

We wanted to know when it was an artillery ground so that we could assess whether cannon were ever actually fired here. But we are surprised to learn that wheeled cannon were used in the battle of Floden in 1513, so the archers could have been practising alongside the cannon-firers. Noisy for the neighbours.

This section lists the subjects commemorated on the memorial on this page:
Artillery - cannons

This section lists the subjects who helped to create/erect the memorial on this page:
Artillery - cannons

Designed by Shcherbakov, made by Breeze. Unveiled by the British Secretary o...