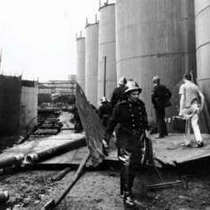 J. & W. Dudgeon were shipbuilders on the Thames. The company passed through several hands, eventually becoming a large complex of oil storage tanks, but retaining Dudgeon's name. Amazingly they survived the Blitz and continued operations until 1951. When the site was being demolished a fire broke out and resulted in the largest loss of life within the UK’s fire service since WW2.

From Red Plaque: "The Dudgeon’s Wharf disaster led to a new code of practice for UK firefighters when removing tanks with flammable substances. It also helped to bring about the Hazchem Code, the now well-known visual signage of dangerous and volatile substances contained in all buildings, vehicles and storage areas lorries. Introduced in the 1970s, the Code makes it simpler for firefighters to identify and tackle dangerous chemicals during incidents, protecting themselves and the public."