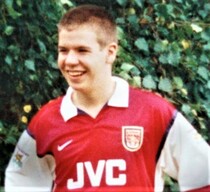 Ciaran Vincent Cassidy was born on 27 October 1982 in Whittington Hospital, Magdala Ave, London N19 5NF, the younger son of Seán Cassidy and Veronica Cassidy née Farry. His elder sister, Lisa Carol Cassidy, was born in 1979. He was a printing shop assistant at Bridge & Co, 92 Chancery Lane, London, WC2A 1DS and lived in Crouch Hill, London, N4. His obituary can be found on the BBC News website.

This section lists the memorials where the subject on this page is commemorated:
Ciaran Vincent Cassidy

Station Officer -  One of two men (with Frederick Mitchell) who gave their li...