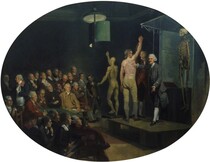 William Hunter matriculated from the University of Glasgow, attended lectures given by Alexander Munro in Edinburgh, was apprenticed to William Cullen in Hamilton and studied anatomy and surgery in Paris. He set up a school of anatomy in Great Windmill Street, London, (the site is now occupied by the Lyric Theatre, 29 Shaftesbury Avenue - the stage door is in Great Windmill Street), and helped his younger brother, John Hunter, establish his career.

Following the safe delivery of a royal baby he was appointed Physician Extraordinary to Queen Charlotte from 1764 to 1783. He opened his collection of anatomical preparations, books, coins and other artefacts to researchers. He was elected fellow of the Royal Society in 1767 and of the Society of Antiquities in 1782.

This section lists the memorials where the subject on this page is commemorated:
Dr. William Hunter

London County Council This was the home and museum of Dr William Hunter, ana...

Originally established in 1673 as The Apothecaries Garden. The word ‘physic’ ...

First refraction hospital in the world

Formed as the London Refraction Hospital (or the Institute of Ophthalmic Opti...